In June 2016, Mnet's survival program Finding Momoland began, a reality show where a group of seven members were selected from 10 trainees. It was decided that the members were going to make their debut, but the Final Mission could not collect 3,000 spectators, so the official debut was delayed for a while to prepare for their debut, promotional events, fan meetings, and the street. On October 26, 2016, the group was appointed as ambassadors for the International Relief Development NGO Plan Korea. The group's debut showcase was held on November 9 of the same year. On November 10, they released their debut extended play Welcome To Momoland and made their debut through M! Countdown. On December 27, six members except Yeonwoo, who stopped working due to lower back pain, attended SBS Gayo Daejeon. In October 2016, Momoland, appointed as the PR ambassador for the International Relief Development NGO Plan Korea, volunteered at the Pak Luong Village in Taipei, Vietnam from January 12 to 16, 2017, to encourage Happy Mov students to participate in Kindergarten construction service.

On March 28, it was announced that Daisy and Taeha would be joining the group, increasing the group to nine members. On April 25, the group had a comeback through The Show. On January 26, their digital single "Wonderful Love" was released. In the same year, on June 3, KBS 2TV Music Bank played the EDM version of "Wonderful Love", which was released as a digital single on June 16. On July 22, the group performed the EDM version of "Wonderful Love" on The Show. On August 22, 2017, they released their second EP, Freeze!, debuting the title track "Freeze" through The Show on the same day.

Meaning behind the name

According to the group interview by Celuv.TV, the first part of their name, MOMO, came from the 1973 German novel titled "Momo" by Michael Ende, which the main character named Momo gives hope and dreams to many people, while "Land" means a place where people can go to, play to, and rest at times just like in an amusement park, there are various rides, specifically "Merry-Go-Round" (the official fandom name). Therefore, their name is like an amusement park theme and its goal is to provide hope that people of all ages and gender could enjoy their music and show their various sides. 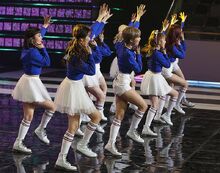 On January 3, 2018, they made a comeback with their third EP, Great! with the title track "BBoom BBoom". The same month, Serebro accused Momoland of plagiarizing their song "Mi Mi Mi" with "Bboom Bboom". The composer of "Bboom Bboom", Shinsadong Tiger, denied the allegations by pointing out that "the bass line [is] commonly heard in retro house or swing electronic genres, as well as the 4-stanza chord." On January 11, they performed and won on Mnet's M! Countdown. They also won Show Champion on January 31 and The Show on February 6.

Momoland held promotional events in Tokyo and Osaka from February 28 until March 4, 2018. The group garnered 25,000 spectators at an event held in Japan over four days. Approximately 100 media also participated in the showcase held at Tower Records in Shibuya. Momoland also performed songs such as "JJan! Koong! Kwong", "Freeze", "Wonderful Love" (EDM version), and "Bboom Bboom". Momoland also signed with King Records to release their upcoming debut in Japan on June 13, 2018, as well as a Japanese version of their single "Bboom Bboom".

the agency of the two denied the rumor... later on march MLD anounced that daisy and taeha will not participate in momoland's 4th mini album "Show Me" that released on march 20,

yeonwoo will still part of MLD as a solo arist, taeha will going to start a new life

and MLD still in discussion with daisy

after almost 9 months daisy finally showed up via kbs news releasing all rumours about MLD and mnet's rigging off the survival momoland program, and stated that all members paid for almost 70.000won for the production cost of the said program, but later on MLD released a statement denying the rumours.

also daisy said that in may 2019 she asked the agency to bring her back to the group but the agency did not allow her to participate in momoland's activities, and after a month daisy asked to the agency to terminate her contract but agency demands 1billion.. daisy's aunt said in a post that daisy is in the process of leaving momoland

meanwhile in a korean radio show, nancy said that she will start "The Soulmate" shoot in february 2020 in philippines, and there will be a shoot of the said drama also in seoul

in january 2020 nancy cameback again to the philippines in manila with other k-pop idols for manila bay clean up..in the interview nancy admitted that her heart was hurt as he see the condition of manila bay..

and about the soulmmate in the abs cbn news interview, nancy said that since december 2019 she did a workshops for soulmate and there will be an workshops with james reid in the future

Retrieved from "https://momoland.fandom.com/wiki/Momoland?oldid=2060"
Community content is available under CC-BY-SA unless otherwise noted.